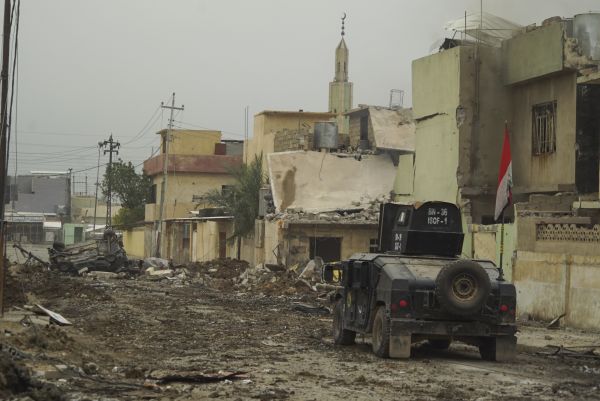 Six months ago, the city of Qaraqosh near Mosul in northern Iraq was liberated from ISIS forces by the Iraqi coalition. However, few of the 60,000+ former residents have returned home. Even fewer choose to stay once they see how the city has changed.

Conditions are not only primitive; they are dangerous. The government has yet to restore electrical power and running water; hundreds of booby-trapped bombs remain hidden, parting gifts from ISIS which set fire to homes and shops of Christians and Shia Muslims during the two-year occupation that began in the summer of 2014.

In the courtyard of The Church of Mary the Immaculate, ISIS fighters burned Bibles and Christian books. Shell casings and bullet holes show that they used the house of worship for target practice, or worse.

Like other residents who fled the city two years ago, Youno Karemi Achem returned to survey the damage to his church and property, search for any precious treasure the occupiers may have overlooked, and mourn the loss of the place he called home.

“Seeing what they did to your city, your house, your church, you think: Can we live here again?” he asked. “I don’t want to leave Iraq but this is a ghost town.”

For many people, returning home after a long absence is complicated and difficult, disappointing or even impossible. That is especially true when they were originally forced from their homes by a natural disaster or some other trauma such as war, persecution or domestic violence.

In order to reconstruct the city of Qaraqosh, former residents need to overcome enormous financial and physical challenges as well as psychological barriers of fear and anxiety. Experts estimate that at least $25 million will be needed just to restore basic services. But money alone will not restore the lost sense of security and trust needed to convince former residents that it is safe for them to return.

Until they have confidence about that, many citizens are unlikely to risk returning, or, if they do come back, it's only to bury their dead.

Most of us don’t know what it is like to be literally in exile, but we have all experienced loss, disruption, and feelings of loneliness. In what ways are we in exile, and how can we return ‘home’?

Lamentations 1:1, 3-4, 10
How lonely sits the city that once was full of people!
How like a widow she has become, she that was great among the nations! ...
Judah has gone into exile with suffering and hard servitude;
she lives now among the nations, and finds no resting place; …
The roads to Zion mourn, for no one comes to the festivals;
all her gates are desolate, her priests groan; ...
Enemies have stretched out their hands over all her precious things;
she has even seen the nations invade her sanctuary ... (For context, read 1:1-16.)

Lamentations opens with vivid images of a devastated Judah and its ruined capital city Jerusalem. Its people have gone into exile. There is no one left to practice the faith or celebrate religious festivals. Even her holiest place has been defiled. Second Chronicles 36:17-23 references this period in the life of the people of God.

Later the poet speaks of his hope in the steadfast, unceasing love of the Lord and endless mercies of God, urging the people to examine their ways and repent of their sin and rebellion, seek God and hope in him, while waiting quietly for the salvation of the Lord (3:21-41).

Questions: When, if ever, have you felt this kind of grief about the condition of the church, your city, your nation, humanity? Where can we find hope for new life in such a situation? Is resuscitation of a devastated place always possible or even desirable? If so, what is needed for that to happen? If not, what next steps are appropriate?

Toward the close of Moses' ministry, he outlined blessings for obedience and curses for disobedience (see Deuteronomy 28) and led the 12 tribes of Israel to renew their covenant with Yahweh in Moab. Before they even set foot in the Promised Land, Moses warned them that if they rebelled against God, God might scatter them, driving them into exile. But if they returned to God, God would gather them from "the ends of the world" and return them to the Promised Land.

Questions: When have you seen God's people scattered? How can we, and even should we, return to gather in the “Promised Land?”

Hebrews 11:10, 13-16
For [Abraham] looked forward to the city that has foundations, whose architect and builder is God. … All of these … confessed that they were strangers and foreigners on the earth, for people who speak in this way make it clear that they are seeking a homeland. ... a better country, that is, a heavenly one. Therefore God is not ashamed to be called their God; indeed, he has prepared a city for them. (For context, read 11:8-10, 13-16.)

When God called Abraham out of Ur, Abraham obeyed, not knowing where he was going (11:8). He was looking for a homeland that would be his inheritance as God's gift to him, not as something he worked for but rather that he would receive by God's grace as he trusted him.

Jesus uses similar language in John 14:2-3 when he says: "In my Father’s house there are many dwelling places. If it were not so, would I have told you that I go to prepare a place for you? And if I go and prepare a place for you, I will come again and will take you to myself, so that where I am, there you may be also." In Hebrews it is God who has prepared a city for his people, in John 14, Jesus takes on that work.

Questions: How would you define the foundations of the city of God? How is God building that city?

1 Peter 1:1-5
Peter, an apostle of Jesus Christ, To the exiles of the Dispersion ... who have been chosen and destined by God the Father and sanctified by the Spirit to be obedient to Jesus Christ .... Blessed be the God and Father of our Lord Jesus Christ! By his great mercy he has given us a new birth into a living hope through the resurrection of Jesus Christ from the dead, and into an inheritance that is imperishable, undefiled, and unfading, kept in heaven for you, who are being protected by the power of God through faith for a salvation ready to be revealed in the last time. (For context, read 1:1-9.)

The recipients of this letter had been scattered. Yet Peter speaks of their position in glowing terms: "chosen," "destined," "sanctified," possessing a new birth, a living hope, an imperishable, undefiled, and unfading inheritance, and salvation, protected by God's power.

In the early 20th century, theologian Gerhardus Vos articulated the "already but not yet" paradigm regarding the nature of the kingdom of God as a reality we experience truly but not yet fully, by faith but not yet by sight. We already have an inheritance, but it is being kept in heaven for us … so in some sense we have yet to fully possess it.

O God our heavenly Father, you have blessed us and given us
dominion over all the earth: Increase our reverence before
the mystery of life; and give us new insight into your purposes
for the human race, and new wisdom and determination in
making provision for its future in accordance with your will;
through Jesus Christ our Lord. Amen.