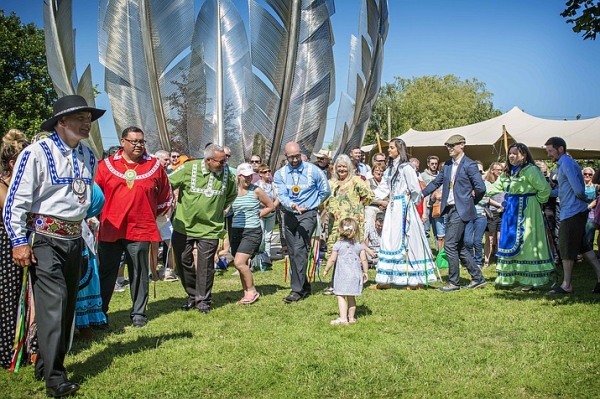 Paying it Forward During the Pandemic

The Irish 'Pay It Forward' to the Navajo and Hopi

Earlier this month, the women operating the Navajo and Hopi Families Covid-19 Relief Fund, a volunteer effort to get food and water to those nations' homebound elders in remote areas during the pandemic, noticed a significant increase in donations to its GoFundMe page, with almost all the new money coming from Ireland.

So strong was the uptick in contributions that Cassandra Begay, the fund's communication director, at first wondered if the website had been hacked. But eventually, they learned that the new donations started with a Twitter exchange between an Irish news reporter and a Navajo engineer.

Naomi O'Leary, European correspondent for the Irish Times, had tweeted, "Native Americans raised a huge amount in famine relief for Ireland at a time when they had very little. It's time for us to come through for them now." Aaron Yazzie of Los Angeles responded by tweeting the web address of the relief fund's GoFundMe page. As of May 7, there were 20,000 Irish donors to the Navajo & Hopi Families Relief Fund, who had donated $670,000. The fund has topped $4 million since its inception in March.

O'Leary's reference was to an 1847 act of charity by the Choctaw Tribe, recently off the Trail of Tears and struggling to make its new home in what is now Oklahoma. After learning that the Irish were also oppressed and hungry, due to that country's notorious Potato Famine, the Choctaws, despite having few resources themselves, raised $170 -- about $5,000 in today's dollars -- and sent it to Ireland to help with food relief. That $170 was the largest donation received by the Irish during those terrible days, that saw the death from starvation and disease of one-eighth of the population.

With the donations pouring into the Navajo and Hopi Families Covid-19 Relief Fund, some might say the present-day Irish were "paying forward" the kindness the Choctaws had shown all those years ago to the Irish people of that day.

In its report of the surge of money to the Navajo and Hopi Families Covid-19 Relief Fund, The Christian Science Monitor said, "There were thousands of unfamiliar names appearing on the team's GoFundMe page -- the first names Siobhán, Padraig and Aoife, or surnames O'Leary, McMullen and Gallagher -- each donating small amounts from across the Atlantic. Many posted a common Irish proverb: Ar scáth a chéile a mhaireann na daoine, which means, 'In each other's shadows the people live.'"

The Navajo Nation occupies portions of northeastern Arizona, southeastern Utah and northwestern New Mexico, and has a population of about 330,000. Even before the lockdown, unemployment was at about 50 percent. As of May 19, the Navajo surpassed New York for the highest infection rate of Covid-19 in the United States. Although New York City far outpaces the Navajo Nation in the number of deaths from the virus, the rate of infection among the Navajos is higher.

According to the Navajo Department of Health, by Memorial Day, the Navajo Nation had 4,794 cases of the virus and the number of deaths from the disease was 157. Nearly 1,500 people have recovered from the disease, and Jonathan Nez, the Navajo Nation president says the "curve is flattening." The Hopi reservation is in northeastern Arizona, surrounded by the Navajo reservation, and the governments of and organizations in the two tribes are known to work together on common problems. The 2010 census found there were 19,338 Hopi in the United States.

The Irish donations ranged from $10 to more than $1,000. "We're so grateful to the ancestors of the Choctaw Nation for their generosity generations ago, and to the Irish people for paying it forward," said Begay. "It just goes to show the interconnectedness of everything, which is our concept of K'e [kinship], and that a simple act of kindness can be profound."

For her part, O'Leary said she's happy her tweet helped spark donations, but she wasn't the first one to make the connection between the long-ago Choctaw donation and the present need. "Before I wrote my tweet, Irish people had already begun sharing the fundraiser and mentioning the Choctaw donation," O'Leary wrote. "It came from the grassroots."

Orla Keane, consul general at Ireland's consulate in Los Angeles, said she's been enthusiastically following the story. "I'm really delighted that the Native Americans' act of kindness over 170 years ago is remembered and that some of our people found a way to reciprocate," she said. Keane said the Choctaw incident may have been fresh in people's minds since 2017 marked the 170th anniversary of the Great Famine, and, among other events, a sculpture of a circle of giant feathers titled "Kindred Spirits" was unveiled in County Cork to mark the Choctaw contribution.

As for the Choctaws today, Casey Davis, the Choctaw tribe's director of government public relations, said her people think it's "great" that the Navajo and Hopis are now benefiting from the Choctaw's generosity back in 1847. "Any time a tribe gets help, we're happy." said Davis.

Begay, who is Navajo, said her group is planning to reach out to the Choctaw and thank them. "Our goal is to give every Navajo and Hopi elder who needs it one two-week supply of food," she said. "We're still surging; this (virus) hasn't peaked yet. And they say it's going to come back in the fall." So far, the group has helped between 2,000 and 3,000 people all over the reservation, along with several Hopi villages, according to Begay. They have also given masks made by an all-volunteer group of local seamstresses.

Ecclesiastes 11:1
Send out your bread upon the waters, for after many days you will get it back.

Proverbs 19:17
Whoever is kind to the poor lends to the LORD, and will be repaid in full.

Matthew 6:3-4
But when you give alms, do not let your left hand know what your right hand is doing, so that your alms may be done in secret; and your Father who sees in secret will reward you.

Collect for Pentecost 8C (ANZPB p. 634)
Christ of the new covenant,
give us the happiness to share,
with full measure, pressed down,
shaken together and running over,
all that you give us.
Amen.