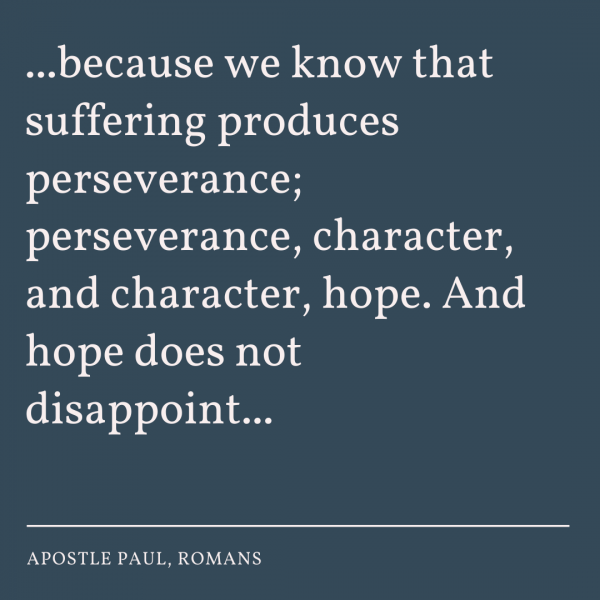 Romans 5:1-8:
Therefore, since we are justified by faith, we have peace with God through our Lord Jesus Christ, through whom we have obtained access to this grace in which we stand; and we boast in our hope of sharing the glory of God. And not only that, but we also boast in our sufferings, knowing that suffering produces endurance, and endurance produces character, and character produces hope, and hope does not disappoint us, because God’s love has been poured into our hearts through the Holy Spirit that has been given to us.

For while we were still weak, at the right time Christ died for the ungodly. Indeed, rarely will anyone die for a righteous person—though perhaps for a good person someone might actually dare to die. But God proves his love for us in that while we still were sinners Christ died for us.

This past week two Public Theologians posted about the weekly lectionary reading from Romans 5:1-8. Both of them focused specifically on this passage.

“…knowing that suffering produces endurance, and endurance produces character, and character produces hope, and hope does not disappoint us”

Here are their reflections:

It’s rude to demand the student to have to be the teacher while learning the lesson.

Expectations, dreams, desires are a good thing because it keeps us engaged in life. But they can easily become the destination versus the compass that is leading you forward.

Obviously suffering is an expansive word … from physical to mental distress … and I’m not making light of that. But a human life is filled with many expectations, and we all suffer for that.

Father Richard Rohr says that people meet God through intense love or intense suffering. So what Divine doorway of conversation has opened because of this pandemic season?

I want to submit to you that why suffering is at the start of a “hope that does not disappoint” is because suffering demands you to be a student, not a teacher. It demands that you start at not knowing instead of knowing. Which is hard as an adult ... because you feel like you should be a teacher of some kind ... or at least have it together.

But these are unprecedented times. And it is completely ok to feel like you don’t have it together. You have done nothing wrong. You just started a new class in the school of life. You are on your way to being a teacher of a hope that does not disappoint ...

(This is a short sermon that is to be shown on closed circuit TV inside the women’s prison here in Denver. These incarcerated women have been on lock down for months because of the pandemic. They cannot see their friends or family. They cannot attend their classes or worship services. Every 72 hours they get a shower. Other than that they are confined to their rooms. My heart goes out to the 2.3 million incarcerated people in this country who are also in lock down. I cannot wait until I can worship again with New Beginnings.)

Hope and Disappointment
Hello friends. Before I go on with this sermon, I want to say that you are not forgotten. The world is turned upside down right now. There’s a global pandemic and a fierce movement for the honoring and protecting of Black lives and while all of that happens you are in lockdown. So I want you to know that you are loved. You are prayed for. You are considered and thought of and remembered. You the residents of the Denver Women’s Correctional Facility are not forgotten.

A reading from Romans:
Therefore, since we are justified by faith, we have peace with God through our Lord Jesus Christ, through whom we have obtained access to this grace in which we stand; and we boast in our hope of sharing the glory of God. And not only that, but we also boast in our sufferings, knowing that suffering produces endurance, and endurance produces character, and character produces hope, and hope does not disappoint us, because God’s love has been poured into our hearts through the Holy Spirit that has been given to us.

Ok, here we go: In this reading from Romans, Paul says that hope does not disappoint. Which I honestly have a hard time relating to since I, maybe like many of you, have had a lot of hopes which have started out great but then ended in disappointment. So sometimes it’s easier to not hope at all rather than to risk starting with hope and ending up with disappointment again.

It all reminds me of that story at the end of Luke’s gospel when a couple days after Jesus’ death, two of his disciples were walking the road to Emmaus trying to make sense of what just happened. And as they discussed all of this, a stranger walked up (spoiler alert – it was Jesus), and they didn’t recognize who was walking with them and so they told him the story of Jesus’ life, ministry and death at which point they then speak what are maybe the 3 saddest words in scripture: they said: We Had Hoped. We had hoped Jesus was the one to redeem us and defeat our enemies. Instead, Jesus is dead and it is we who are defeated. Those two disciples started with hope and ended with disappointment which I can relate to.

So this all makes me wonder if maybe hope is not the healthiest starting point. I mean sure, if we are going to take our cues from inspirational posters or motivational speakers then by all means, let’s use hope as a starting point.

So while in our reading from Romans Paul speaks of a hope that does not disappoint, let’s be clear: hope is not his starting point…suffering is.

Which can also feel a little sketchy…connecting hope and suffering.

I’ve said it before but whenever I am in a real mess of pain and some well meaning Christian says “Well, when God closes a door, he opens a window” I immediately look around for that open window so I can push them the hell out of it. Which is to say, I don't find ignoring the difficulty of life in favor of blindly cheerful optimism to be hopeful … I find it to be delusional.

So, yes, hope can be risky as a starting point, and connecting hope to suffering can be sketchy.

This week I started to think of hope, not as a starting point, but as that which is left after everything else has failed us. After we have tried optimism and virtue and piety and denial and just trying harder and none of it has worked, then what is left is hope. And that kind of hope, is an Easter hope. Because it’s the kind of hope that is still standing after being dredged through Good Friday first. Easter hope is the kind that is still standing after being dredged through global pandemics and economic collapse and prison lock downs and systemic racism first.

And when it comes down to it, as cynical as I am, I still want hope - I just want a hope that doesn’t disappoint. I want a gritty hope - a hope that can only come from a God who has experienced birth, and love and friendship and lepers and prostitutes and betrayal and suffering and death and burial and a decent into hell itself. Only a God who has born suffering themselves can bring us any real hope of resurrection.

And I believe that faith in this kind of God doesn't produce cheerful optimism, it produces a gritty, defiant hope that God is still writing the story and that despite the darkness a light still shines and that God can redeem us and that beauty matters and that despite every disappointing thing we have ever done or that we have ever endured, that there is no hell from which resurrection is impossible. To borrow from Bruce Cockburn, this kind of faith is one that kicks at the darkness until it bleeds daylight.

This kind of faith kicks at despair, until it bleeds hope.

Keep kicking, dear ones. You’re not alone. We are kicking it too.