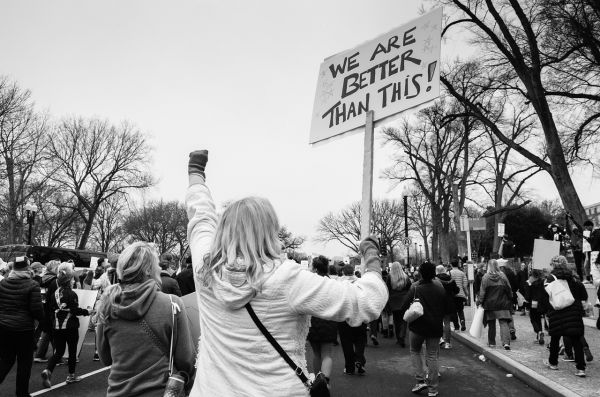 The Rise and Shine discussion group meets Sunday mornings at 9:00 am in the Chapel. Adults from the 8:00 & 10:00 services gather to discuss questions that are relevant to their lives through the lens of a current topic and scriptural references. This week's story can be read or downloaded below.

A healthcare professional working in a hospital emergency room in Charlottesville, Virginia, wrote this about the events that unfolded last Saturday: "The whole week leading up to this felt like watching an out-of-control freight train barreling down on a car stuck on the tracks, with no way to stop it."

Heather Danielle Heyer, 32, was killed, and 19 others were injured during the rally when 20-year-old James Allen Fields of Ohio, whom his former high school history teacher described as a Nazi sympathizer, allegedly rammed his automobile into pedestrians gathered to protest the "Unite the Right" movement. Fields was apprehended and charged with second-degree murder. Two on-duty state troopers monitoring the situation from the air were also killed in a helicopter crash the same day.

Author Brian McLaren, who was in Charlottesville at the invitation of local clergy, witnessed many of the white nationalists dressed in Ku Klux Klan hooded robes or paramilitary clothing, displaying confederate and Nazi flags in abundance. They were heavily armed with helmets, shields, guns (including semi-automatic rifles), torches, tear gas, and pepper spray, McLaren said. "They looked like they came expecting to fight, threaten and intimidate."

"It was truly horrifying," the Rev. Elaine Thomas, associate rector at St. Paul's Episcopal Church in Charlottesville, said. "[The white supremacists] came to town to cause violence, there's no question about it."

While McLaren acknowledged that some who came to oppose the ideology of white supremacy, racism and injustice in its various forms may not have chosen the path of non-violence, he said most were committed to peaceful resistance, even when they were subjected to "vicious attacks, insults, spitting, pepper spray, tear gas and hurled objects."

"There was no call to violence or revenge; only a call to resilient resistance" among the multicultural, multiracial clergy and representatives from various faith traditions, McLaren said.

The action of the man who drove his car into a crowd of defenseless people has been described by many as a repugnant act of domestic terrorism, but others lauded the attack. Justin Moore, the Grand Dragon for the Loyal White Knights of the North Carolina Ku Klux Klan, told WBTV, "I'm sorta glad that them people got hit and I'm glad that girl died. They were a bunch of Communists out there protesting against somebody's freedom of speech, so it doesn't bother me that they got hurt at all."

Substitute teacher Kathy Wilson, who is white, reacted to the news about Charlottesville with this comment on social media: "I am, this morning, so very ashamed of my skin color."

To which Delonte Gholston, an African-American pastor and artist responded: "No. God made you in his image. You are fearfully and wonderfully made as the descendants of Europeans. Yet you have inherited a system designed for deep spiritual wickedness. Stand in the beauty of who you are and work to dismantle this evil and unjust system."

"We Christians need to face the degree to which white Christianity has failed -- grievously, tragically, unarguably failed -- to teach its white adherents to love their non-white neighbors as themselves," McLaren urged. "White supremacist and Nazi dreams of apartheid must be replaced with a better dream -- people of all tribes, races, creeds and nations learning to live in peace, mutual respect and neighborliness."

What I Saw in Charlottesville. Auburnseminary.org
I Went to Charlottesville During the Protests. Here's What I Saw. The Daily Signal
Evil Is Real, but Love Is Stronger. Christianity Today
Episcopalians Rally Against Hate as White Supremacists Bring Violence to Charlottesville. Episcopal News Service
"I'm Glad That Girl Died" During Virginia Protest, Says NC KKK Leader. The Charlotte Observer

Paul expresses frustration over the conflict between his desire to do good and his failure to do what is right. He attributes that failure to the sin nature within himself. At the end of the passage, Paul assures the reader that our Lord Jesus can indeed rescue us from our proclivity to sin. We cannot save ourselves, but the Savior sent from God can deliver us from "the sin that so easily entangles" us (Hebrews 12:1, NIV). For that to happen, we must look to Jesus for the power to flee temptation and resist sin. That power does not reside within us, but in Jesus.

Questions: How can we accept our own flaws while still maintaining the hope that the Christ who now inhabits us is able and willing to deliver us from the "sin that dwells within"? What kind of nation do you think God wants us to be? How can we move in the direction of God's desire for us?

James 3:5-8
How great a forest is set ablaze by a small fire! And the tongue is a fire. The tongue is placed among our members as a world of iniquity; it stains the whole body, sets on fire the cycle of nature, and is itself set on fire by hell. For every species of beast and bird, of reptile and sea creature, can be tamed and has been tamed by the human species, but no one can tame the tongue -- a restless evil, full of deadly poison. (For context, read 3:5-12.)

James warns about the incendiary nature of words. It is just as incongruous, he says, for words of blessing and cursing to come from the same mouth as it is for a spring to produce both fresh and stagnant water. If one claims to love God with pious, flowery language, but curses those who are made in God's image, something is wrong with that picture (vv. 9-12). Such behavior reveals hypocrisy, self-deception and a lying spirit.

You have heard it said that words matter. Just as a fruit tree shows what kind of tree it is by the fruit it bears, so a person's words reveal what kind of person he or she is. There is tremendous power for good and evil in the words we say or do not say.

Questions: Where do you see words "staining" and "poisoning" the body politic today, in society, in the church, in your community, on social media, in your own relationships? How are our words and the words of the church effecting race relations in our society? What solution to this problem do you find in our faith?

James 1:19-20, 26
You must understand this, my beloved: let everyone be quick to listen, slow to speak, slow to anger; for your anger does not produce God's righteousness. ... If any think they are religious, and do not bridle their tongues but deceive their hearts, their religion is worthless. (For context, read 1:19-27.)

Once again, James speaks here of the self-deception and hypocrisy of those who think they are pious but who fail to discipline their tongues. Paul calls self-control one of the fruits of the Spirit (Galatians 5:22-23). When the Holy Spirit lives within us, he produces the ability to control impulses and to discipline our tongues to choose our words with care, to build up rather than tear down others.

Almighty God, who has given us this good land for our
heritage: We humbly ask you that we may always prove
ourselves a people mindful of your favor and glad to do your will.
Bless our land with honorable industry, sound learning, and
pure manners. Save us from violence, discord, and confusion;
from pride and arrogance, and from every evil way. Defend
our liberties, and fashion into one united people the multitudes
brought here out of many kindreds and tongues. Endue
with the spirit of wisdom those to whom in your Name we entrust
the authority of government, that there may be justice and
peace at home, and that, through obedience to your law, we
may show forth your praise among the nations of the earth.
In the time of prosperity, fill our hearts with thankfulness,
and in the day of trouble, suffer not our trust in you to fail;
all which we ask through Jesus Christ our Lord. Amen.