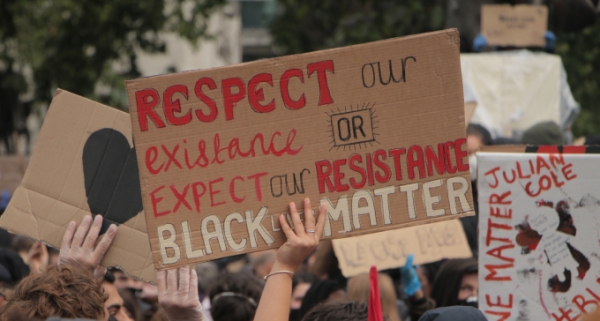 
Proverbs 29:4-18
By justice a king builds up the land, but he who exacts gifts tears it down. A man who flatters his neighbor spreads a net for his feet. An evil man is ensnared in his transgression, but a righteous man sings and rejoices. A righteous man knows the rights of the poor; a wicked man does notunderstand such knowledge. Scoffers set a city aflame, but the wise turn away wrath.

Protests continue in hundreds of cities across the United States, and in London and Berlin as well, in response to the death of George Floyd, an unarmed African-American man who died while in Minneapolis police custody. Many of the demonstrations have been peaceful, but some have turned into violent clashes. Derek Chauvin, the police officer who kneeled on Floyd's neck for over eight minutes, has been arrested and charged with second-degree murder and manslaughter, but the protests continue.

In Minneapolis, protesters set fire to a police station as violence spread through the Twin Cities. Dozens of businesses boarded up their windows and doors in attempts to prevent looting. Target, which is based in Minneapolis, temporarily closed two dozen stores, and the city shut down most of its light-rail system and all of its bus service for several days, citing safety concerns.

At the same time, thousands of peaceful demonstrators marched through the streets of the Twin Cities of Minneapolis and St. Paul, calling for justice. A 20-year-old black woman named Erika Atson was among those who came together for peaceful protest. She told the Associated Press that she had been at "every single protest" since Floyd's death and was worried about raising children who could be vulnerable in encounters with the police. "We don't want to cause any damages," she said. "We just want the police officer to be held accountable."

According to a Washington Post database, there were over 1,000 deaths by police in 2019. Black men are almost twice as likely to be shot by police, a number that has not changed since the death of Michael Brown of Ferguson, Missouri, in 2014. For young black men in the United States, being killed by an officer is a significant mortality risk. "Black people in America are at much greater risk for instances of excessive force," said former Seattle police chief Norm Stamper to the Christian Science Monitor. "There's no way to pretty that up."

Efforts to hold police officers accountable include the strengthening of decertification programs that make it harder for troubled officers to re-enter the profession. A program called EPIC (Ethical Policing Is Courageous) has been created to protect junior officers when they speak against the actions of more senior officers. In addition, videos of police misconduct are a powerful tool for reform: The Kansas City Board of Police Commissioners has decided to start using the video of Floyd's death to train officers how not to detain a suspect.

However, police brutality isn’t the only issue angering many and driving further protests, riots, and looting. Activist Kimberly Jones, in a video that went viral, used the analogy of playing Monopoly hundreds of times, only to have to give up your share of the property and money that you’ve won after each game while your opponent gets to keep theirs as a metaphor for the systemic racism that black people have been dealing with in America. About the riots and looting, Jones says that black people have been "exceptionally forgiving of the atrocities we face in this country," but the time has come to fight for TRUE equality. “Let’s ask ourselves why, in this country in 2020, the financial gap between poor blacks and the rest of the world is at such a distance that people feel like their only hope […] to get some of things that we flaunt and flash in front of them all the time is to walk through a broken glass window and get it…”

Many celebrity activists have been amplifying similar messages as Jones. John Oliver, recently spent the entirety of one of his Last Week Tonight episodes with a fact based deep-dive into the history of systemic racism in this country and how our systems uphold it, using equal opportunity to criticize everyone from Tucker Carlson to Joe Biden. In regards to complaints of big businesses being looted Oliver said, “If you’ve said the name Macy’s more than you’ve said the name Breonna Taylor this week, you can very much f*** off.”

About the strife between police and the black community, Oliver says “It didn’t start this week, or with this president, and it always disproportionately falls on black communities.” He went on to quote many statistics supporting the notion that, “If you are Black in America, I can’t even begin to imagine how scared, angry, and exhausted you must feel, not only this week, but constantly.”

But why resort to rioting, looting, and fighting violence with violence? “So, when they say ‘Why do you burn down the community? Why do you burn down your own neighborhood?’ It’s not ours. We don’t own anything,” Jones lamented. And, when a group of people feels like they have nothing to lose and are systemically prevented from anything to gain, it might be easy to understand why rioting and looting is their reaction.

“This clearly isn’t about individual officers,” Oliver said. “It’s about a structure built on systemic racism that this country created intentionally, and now needs to dismantle intentionally, and replace with one that takes into account the needs of the people that it actually serves.”

*Warning: Videos linked below contain language and imagery that may be offensive to some viewers.
John Oliver Delivered A Materclass On Police Brutality On ‘Last Week Tonight.’Decider

George Floyd: How a Suspected Counterfeit $20 Bill Led to Protests Across the US.as

Isaiah 1:16-17
Wash yourselves; make yourselves clean; remove the evil of your doings from before my eyes; cease to do evil, learn to do good; seek justice, rescue the oppressed, defend the orphan, plead for the widow.

Luke 4:18-19
The Spirit of the Lord is upon me, because he has anointed me to bring good news to the poor. He has sent me to proclaim release to the captives and recovery of sight to the blind, to let the oppressed go free, to proclaim the year of the Lord's favor.

Prayer in Times of Conflict (BCP p. 824)
O God, you have bound us together in a common life. Help us,
in the midst of our struggles for justice and truth, to confront
one another without hatred or bitterness, and to work
together with mutual forbearance and respect; through Jesus
Christ our Lord. Amen.