Proclaiming the Dream of Beloved Community 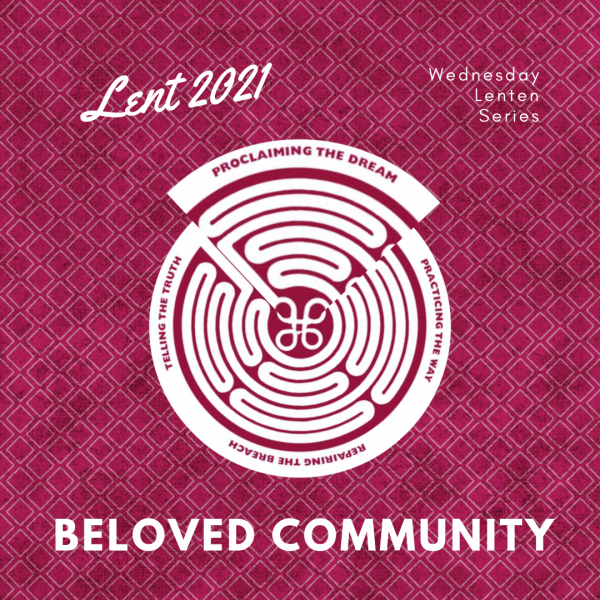 This Lent as we take a closer look at another quadrant of our Becoming Beloved Community initiative, Proclaiming the Dream of Beloved Community, we are called to remember our Baptismal Promise to proclaim by word and example the Good News of God in Christ. God is calling us in this moment of systemic racism awareness and desire for freedom to pursue and proclaim the dream of beloved community.

Join us on Wednesday evenings at 6:30 pm on Zoom, a brave space in this socially disorienting moment. A space where we join the struggle to see, join, be, and further the beloved community among all God's children. These sessions will focus on the following:

February 24 - The Midwives, Moses and the Desert
Listening for the Sound of the Genuine. Your life is the point where God’s calling is brought to bear in the world.

March 3 - Baptism and the Burning Bush
Love that knows no bounds. Acknowledging America’s lingering plantation narrative and its effects on what we allow ourselves to face and what we allow others to see.


March 10 - Called into Community
Better than assimilation. Freedom from identification with whiteness, its wounds, its fragility, and its privileges.


March 17 - Leaving Egypt, the 72, and Good Trouble
The power of collective change. Considering how our church acts, leads and follows social change in Cincinnati.


March 24 - Beatitudes and New Creation
Spending privilege as a co-conspirator. Learning to telling my story, the costs I’m willing to pay, and the new relationships I’ll risk in order to participate in beloved community.

Facilitators: Courage to Connect (C2C) exists to free organizations and individuals from internal addictions to racism in order to co-create the common good. C2C was born in 2016 from the friendship of Daniel Hughes and Troy Bronsink, black and white pastors respectively, seeking to cultivate brave space as the city of Cincinnati worked through the pain and disorientation of the murder of an unarmed black man, Sam DuBose, by white police officer, Ray Tensing. Since then we’ve added mindfulness components to our work as well as trauma informed work. Over 1000 people have attended over 4000 hours of C2C workshops and we are in the process of training more trainers.

Register now for this 2021 Lenten Offering

Thank you for registering for our Wednesday Evening Lenten Series. Please use the Zoom log-in found on our website to access each of the sessions. We look forward to seeing you on Wednesday, February 24 at 6:30 pm.